According to Secretary Andanar, Tacloban has seen a sharp decline in the number of daily confirmed Covid-19 cases from the first week of September up to the present.

“Aside from placing the city under the General Community Quarantine status from September 1-30, we have also noticed the good practices implemented in the city such as the utilization of hotels as isolation centers, the implementation of the Tacloban Safe City Application using the QR codes, and the empowering of barangay officials through the establishment of the Hyper Local Measures Kontra Covid,” Secretary Andanar said.

Grateful for the acknowledgement, Tacloban Mayor Alfred Romualdez said during the program that hotels are suitable for isolation as these are complete with the needed facilities. According to him, this is also a sort of hitting two birds with one stone, considering the use of the entire hotel at a very large discount for isolating Covid-probabale individuals, and at the same time helping the business community.

“When certain individuals have been determined by the contact tracers to be close contacts of a Covid positive patient, we immediately isolate them. We just do the swabbing at the hotel and once tested negative, we send them home. For those with positive results, the quarantine continues,” the Mayor said.

On the QR Code policy, Mayor Romualdez said that Tacloban, being the capital city of the region, this system has been a big help in identifying and monitoring the movements of the people in the city. The QR Code bearing the name and address of the person, is a mandatory requirement before being entertained in any business establishment. He also said that this is the best way of controlling people because when a person is an LSI or has just came from a  place under ECQ, the code automatically signals alarm, hence, an immediate attention is given.

City Environment Officer Jonathan Hijada in his facebook message, said that these type of wastes which are also known as special wastes such as masks, gloves and other equipment, were used to prevent the transmission of diseases. These then must be disposed separately as these may possibly be the source of contagion and could be harmful to the public.

“We have to be mindful in segregating our garbage. These kind of infectious wastes must be separated from the ordinary wastes. They must be properly enclosed and labeled, as these may pose risk of transmitting the disease, particularly the Covid-19 which is highly contagious,” Hijada said.

He added, “There is a special management for this type of garbage especially those coming from the Covid isolation facilities. They are being separated and are not allowed for collection by ordinary garbage collectors.”

The city official also said that the office has placed three big garbage bins in the designated isolation centers, and these were labeled with tarpaulin so as to guide the collectors as to where these must be temporarily deposited.

CALL FOR ENTRIES for Icon Contest (Sculpture or Emblem Design)

EVHRDC is holding the Icon contest to develop and showcase an icon, emblem, or sculpture, which would represent the theme/vision of EVHRDC. This design shall be customized into a trophy to be used by the consortium in recognizing budding and distinguished health researchers in future health research awards.

Submission maybe physical or online to:

Email address: This email address is being protected from spambots. You need JavaScript enabled to view it.

DEADLINE FOR SUBMISSION OF ENTRIES:

The Eastern Visayas Health Research and Development Consortium (EVHRDC) in its commitment to promote and empower health research activities in Region 8, will be conducting its 2020 Regional Health Research Symposium (RHRS) to be held on October 29-30, 2020 via Zoom. This year, the symposium is anchored with the theme "Research & Innovation for Accessible, Equitable, & High Quality Health Solutions amidst Global Health Crisis". Among the highlights of the activity are the region-wide contest for Oral Research Paper Presentations and Poster Exhibits both in professional and undergraduate categories where modest amount of cash prizes will be given to the winners.

The submission of electronic copies of papers is extended to September 18, 2020, kindly send your entries at This email address is being protected from spambots. You need JavaScript enabled to view it. for the preliminary evaluation and judging. 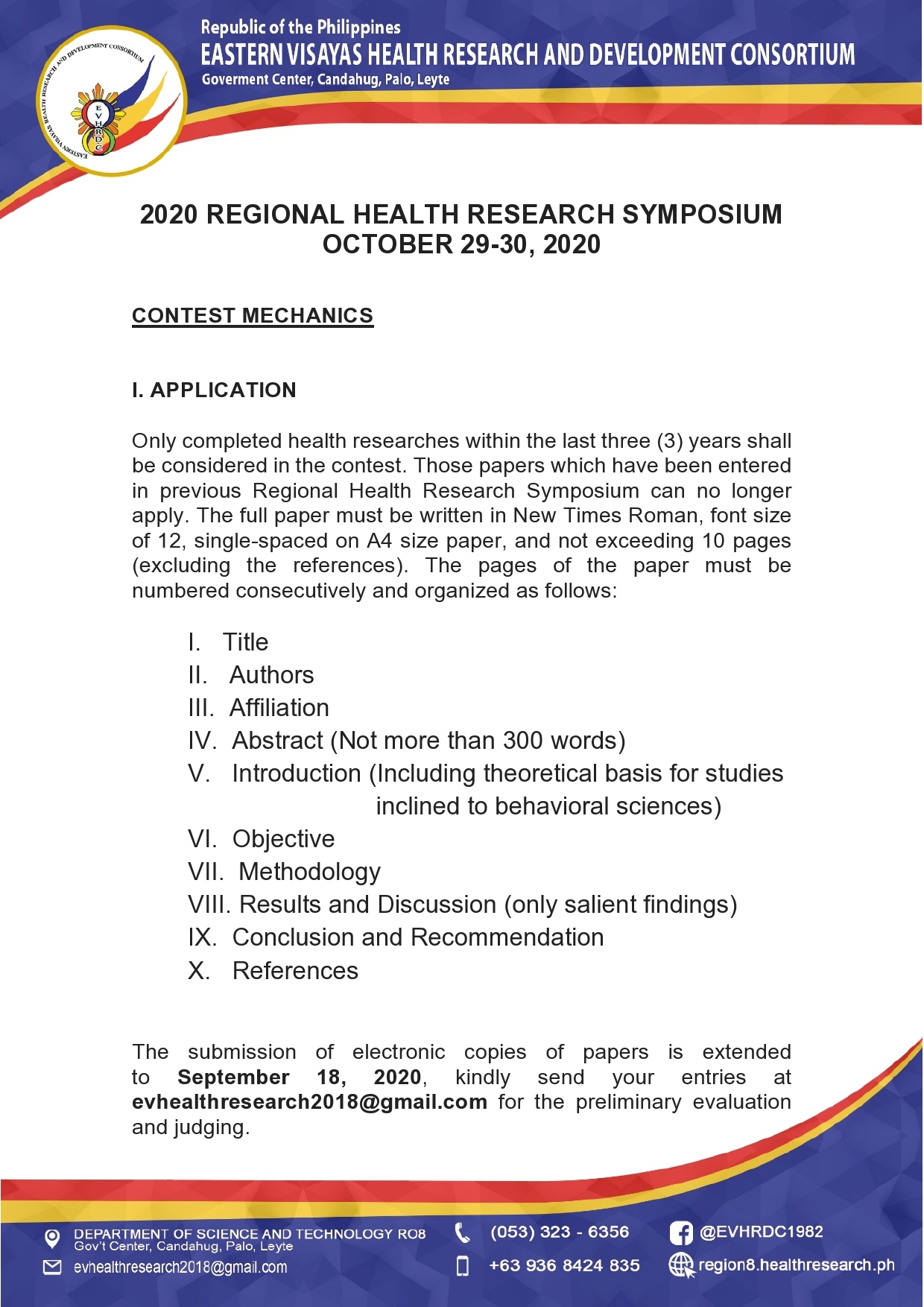 Tacloban City back to GCQ due to increasing COVID-19 cases

This is aimed to further mitigate the spread of Covid-19 in the city.

The GCQ status was implemented after Tacloban City Mayor Alfred Romualdez has requested to the National Inter-Agency Task Force on Covid 19 for the re-classification, considering the increasing number of Covid-positive cases in the city.

However, even if the city is placed under GCQ, Mayor Romualdez said that he has no plan to declare total lockdown in the city.

“I will not declare total lock down in the city because this will affect the flow of trade, commerce and government services, considering that Tacloban City is the regional center of the Eastern Visayas region,” the Mayor said.

Under the GCQ, there were some changes in the implemented guidelines such as the imposition of liquor ban, prohibition of mass gatherings, temporary closure of business establishments that are offering non-essential goods and services, and having curfew hours from 9 p.m. until 4 a.m. in the morning. Customer capacity in food establishments was also reduced from 50 percent to 30 percent, same with religious activities where a maximum of 10 persons are allowed to hear masses. QR Scan system is likewise mandatory for all business transactions, among others.